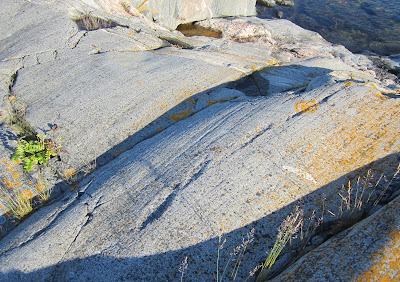 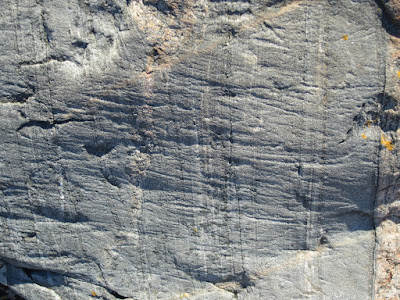 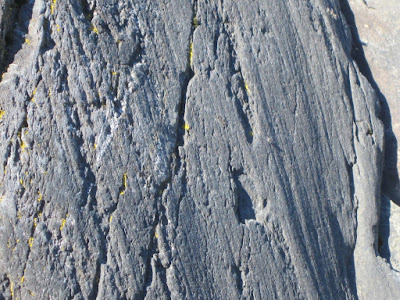 On the Precambrian basement rocks of the Stockholm Archipelago striae are ubiquitous.  They are almost everywhere, and on the islands they are of course best observed round the coastlines of the islands where vegetation is sparse.  Most of them in the area I'm familiar with are running directly N-S.   It's assumed that most are of Weicheslian (last glaciation) age, but some might be older, dating from a time when the ice flowing across this area was around 2500m thick.  Even during the Weichselian the ice was probably 2000m thick, and that translates into enormous basal ice pressures capable of using tools to scour, scratch and gouge the rock in spectacular fashion.

As I have said before (probably every summer at around this time!) the archipelago is a sort of glacial erosion laboratory.  A text-book's worth of stuff in every square kilometre......... 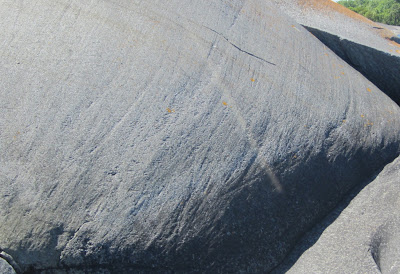 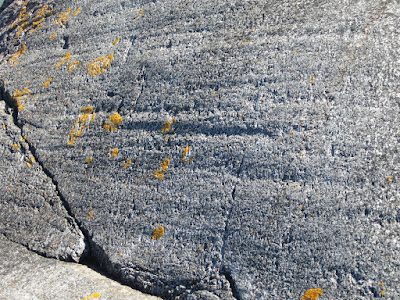 Most of the grooves are less than 2 cms deep, but now and then one finds deeper grooves or channels which can be more than 10 cms deep.  On any particular rock face one might find deviations from the "normal" orientation by up to 30 degrees, and because the ice has obviously moulded itself to the bedrock topography and has flowed around obstacles, on some sloping or vertical rock faces striae may run as much as 45 degrees away from the norm.  To work out the overall direction of ice movement it is always best to examine more or less horizontal rock surfaces.

Not all rock types carry striae, even here in the Stockholm Archipelago -- some that are very coarse-grained seem to resist polishing and scratching very successfully!
Posted by BRIAN JOHN at 20:54