Ring of Brodgar and its "quarry" 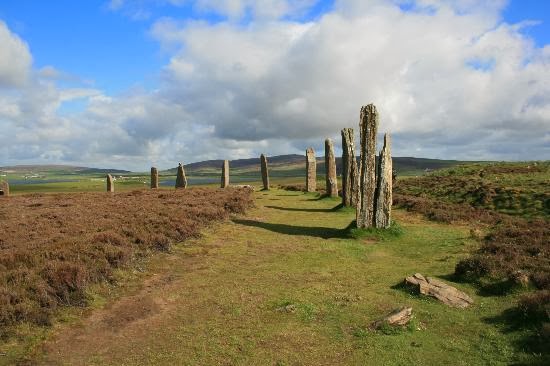 I have mentioned the Ring of Brodgar (on Orkney) in earlier posts, and having seen some mentions of it in assorted publications I have been digging a bit deeper.......

The key authority seems to be Colin Richards, whose writings all seem to be based upon the assumption that the stones were highly valued for their variable qualities (there are supposed to be seven different rock types represented in the ring) and that they were quarried from some way off -- and especially from a place called Vestra Fiold near the west coast of mainland.  A lot has been written about the excavation there, with the discovery of an "abandoned orthostat" propped up on supporting stones.....  sounds familiar?  Hmmmm.....

When people write so enthusiastically about quarries, I immediately ask myself (and them) whether they have examined very carefully the hypothesis that the "quarried" stones might have been transported and emplaced by natural agencies.  In this case, I can find no proper consideration of the thesis that the stones in the Ring of Brodgar are either (a) glacial erratics  or (b) slabs excavated locally, in the rectangular pits that are thought to have been the precursors of the ditch as it appears today, or (3) a combination of (a) and (b). The assumption in the archaeological establishment is that the stones have been transported by the builders of the Ring for maybe 10 miles from the NW towards the SE -- directly against the direction of the established last direction of ice movement across the islands.

We started in Orkney in 2002. Allan Hall of Glasgow University had discovered that many of the stones of the two spectacular circles, the Stones of Stenness and Ring of Brodgar, were derived from different sandstone strata. It seemed they had been brought from different sources, and places, across Orkney.
There is a neglected entry in the Royal Commission Inventory for the Northern Isles, published in 1946, in which a quarry for these two circles was tentatively identified at Vestra Fiold in western Mainland. Interestingly, it lies on a hillside just north of the contemporary late neolithic (3000-2500BC) village at Skara Brae.
Funded by Historic Scotland, the Orkney Islands council and the University of Manchester, we excavated at Vestra Fiold. We found clear evidence for methods of quarrying and moving the monoliths. The first excavation centred on two large stones similar in shape and size to those in the circles, lying in a hollow on the hillside. It seemed they had been quarried upslope and dragged down to the level ground within the hollow. The eastern monolith had then been pulled over a rock-cut pit onto two masonry trestle supports, one at each end of the stone. Unfortunately, during the manoeuvre the trestles had collapsed and the stone slipped sideways.
Most of the many students of stone transport agree that stones were likely supported on a sled running on wooden rollers. The Vestra monoliths could have been pushed downslope with relative ease directly onto rollers. Mounting the stone onto a wooden sled without damage would have been more difficult. JE Garfitt, a forestry adviser writing in Antiquity in 1979 (p190), suggested this would have been done with "levers probably aided by partial cutting away of the earth below". Perhaps this is what people had been attempting at Vestra, before calamity struck. Though undamaged, the stone had been abandoned where it fell.
A second excavation was undertaken in 2003, higher up. We uncovered a quarry, but here too disaster had struck. A massive monolith had been partially removed from the bedrock, but had broken into pieces during attempts to drag it onto stone supports. Though the area investigated was relatively small, we found evidence for the entire quarrying process and an answer as to why Vestra Fiold was chosen for monoliths.
Narrow sandstone beds with fault lines periodically produce monoliths 5-6m long, with characteristic angled tops. Not only were these beds of sufficient quality, but, with enough labour to wedge and lever stones from their bedding planes, quarrying would have been relatively straightforward.
So perhaps Vestra was simply a place that through an unusual geological formation produced "ready made" monoliths? What we do know is that the Fiold took on "sacred" qualities because an unusual long cairn was built next to the quarry.

Wonderful stuff!  Allan Hall has kindly sent me his geological notes in which he describes the characteristics of the standing stones and stumps.  Nowhere does he discuss in depth the idea that they might be erratics, even though all of the stones seem to belong to the Stromness Flagstones, which outcrop at the monument site and in the terrain to the SE of the Ring of Brodgar.  Allan is an archaeologist, not a geologist -- but his field notes are excellent.  And in fairness to him, he was not asked by Colin to speculate about transport mechanisms. 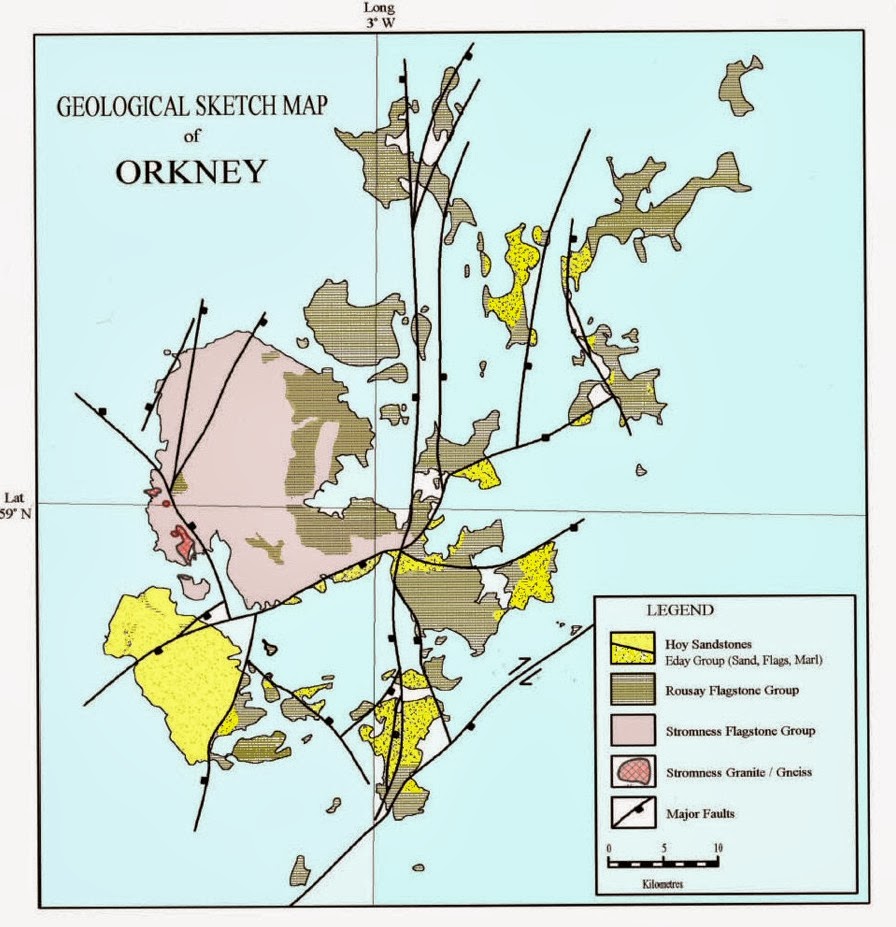 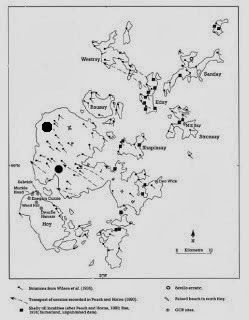 Maps showing the outcrops of the Stromness Sandstones -- very variable, with many different sedimentation cycles -- and on the lower map, the directions of ice movement -- basically from SE towards NW.  The larger dot shows the location of Vestra Fiold, and the smaller dot shows the location of the Ring of Brodgar.  I have seen nothing in the geological work which might indicate that the orthostats in the Ring have come from the north of the island rather than from the south -- and there is one other small piece of evidence in that one stone found at the Ring appears to belong to the Eday Group, which outcrops in the south but not in the north.  That might be an indicator of glacial transport from the south coast of the island towards the peninsula on which the Ring is positioned.

In short, I see no reason whatsoever to believe any of this speculation about the Vestra Fiold "quarry" until somebody has done a careful analysis of the GEOLOGICAL evidence and can convince me that the orthostats in the ring can NOT be glacial erratics or locally derived slabs.

Most of the Old Red Sandstone of Orkney is of Middle Devonian age. The lower part of the sequence, mostly Eifelian in age, is dominated by lacustrine beds of the lower and upper Stromness Flagstones that were deposited in Lake Orcadie. The two flagstones sequences are divided by the Sandwick fish bed, equivalent to the Achanarras formation of Caithness, representing an unusually persistent, deep and widespread lake that filled much of the Orcadian Basin. The sequence continues with the Rousay flagstones deposited in a similar lacustrine environment. The flagstones show a marked cyclicity in their sedimentation, with 86 such cycles being counted for the whole sequence. These are interpreted as representing regular climatically driven changes in lake level caused by Milankovitch cyclicity

The Eday Group overlies the Rousay Flagstones and represents a change to dominantly fluvial/aeolian deposition with only occasional lacustrine intervals. The Eday Group consists of three sandstone units, the lower, middle and upper Eday Sandstones separated by the Eday Flagstones and Eday Marl respectively. The Eday Marl consists mainly of red and green mudstones and siltstones and is thought to have been deposited in a river floodplain environment. Locally pseudomorphs of halite have been found and rarely marine microfossils (scolecodonts) indicating that the basin was affected by occasional marine incursions at this time.
Posted by BRIAN JOHN at 19:23

I think it would be well worth a Literature Search to ascertain how the keyword "geomorphology" is used in the archaeological academic literature. I suspect that archaeologists are using it very freely without understanding its correct meaning when used by, say, academic Geographers such as Brian. Certainly, in my own direct experience of Mike Parker Pearson using the term geomorphology, it is being used in a rather fast and loose fashion. The Geographer - Geomorphologists need to stand up and assert their right that the word is used properly, and, more to the point, that their valuable skills and expertise are used when appropriate to aid archaeologists in their correct interpretation of natural features in the landscape.

In Molygrove he called Dr Ixer a geomorphologist, a slip of the tongue no doubt ....

Apologies to Allan Hall -- Rob reminds me that he is a geologist, who happened to work in an archaeology department. Not the first or the last, I suppose, to end up working in a department which happened to be in the right place at the right time.......

So that explains why his geology field notes are rather good!!

The trendy thing to do, if you're one of these all-seeing WORLD archaeologists, is to pay a visit to Easter Island, add your six-penny worth to the collective wisdom on How The Statues Were Moved, then....Hey Presto!....hop back to Britain where you may now Profess to be a leading authority on such things......

I have the greatest respect for David Field, who recently retired after many years at English Heritage and who was their main field archaeologist for Salisbury Plain. I have heard that he has been working in some capacity on Orkney on matters to do with the alleged quarries. If you take a look at Prof Colin Richards' list of publications on his University
of Manchester site, you will see he has written with David Field in the past.Dave Field strikes me as an eminently sensible individual who reaches his own conclusions e.g. on the previous presence of abundant sarsen rocks within the vicinity of Stonehenge.

Mrs Mortimer -- I don't usually allow anonymous posts -- but since you are clearly a very lovely lady I shall make an exception just this once.....