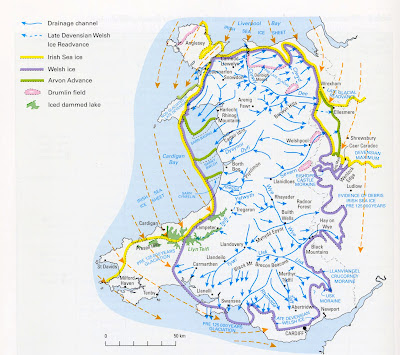 I'm increasingly intrigued by the pattern of glaciation in South Wales, since this does have a direct bearing on the transport of erratics from Pembrokeshire and the South Wales valleys towards Stonehenge.  Chaos!!

The top map shows approximately what happened during the latest (Devensian) glaciation, with the drainage routes of Welsh glaciers and ice streams flowing more or less radially from the centre of the Welsh ice cap and coming into contact in the W, N and NE with the ice of the Irish Sea Glacier.  On the south and SE flanks of the ice cap it's generally thought that there was no contact with Irish Sea ice at this time, since the Irish Sea Glacier was of more limited extent.  However, the yellow line, showing the edge of the Irish Sea Glacier, is inaccurate -- the ice certainly extended further to the E and S than shown, especially in the area of the Pembrokeshire peninsula.

The lower map shows the "battleground" between the Welsh glaciers flowing broadly southwards, and the Irish Sea ice coming in from the west.  We still do not know how big all these glaciers were during the Anglian and other earlier glaciations, and what the precise sequence of expansions and contractions might have been.  Henry Patton in Aberystwyth is currently modelling the Devensian Welsh Ice Cap -- his work is very interesting, but it is an inadequate model in that it does not incorporate the pressure exerted by Irish Sea ice in some sectors at certain times.  That complication will no doubt come in at a later stage in the modelling......

What cannot be doubted, from what we know about erratic transport routes and till characteristics, is that large stones and till components have been moved about many times, sometimes being carried southwards and even westwards by Welsh Ice before being picked up and moved back again -- with a general direction of NW towards SE -- by the massive glacier pressing in from the Irish Sea, Cardigan Bay and St George's Channel.

So we have Irish Sea components and components from the Coalfield valley glaciers on the Vale of Glamorgan and on Gower, and a perfectly adequate mechanism for the flushing out of sandstone blocks from the ORS Senni Beds  towards Carmarthen Bay, and for this material to be moved eastwards later, as the Irish Sea glacier builds up to its maximim size.

Of course, the total "journey time" for a large block of stone being moved from A to B may in reality have been several hundreds of thousands of years, spanning several glacial episodes.

The general rule in all glaciations of this rather complex area is that the valley glaciers will have grown very large, and been very active, in the early stage of every glaciation,  to have been displaced or "muscled aside" later on by Irish Sea ice coming in from the NW and W, as shown on the maps.  Generally ice sheets and ice caps in the mid-latitudes collapse very quickly, which means that there might not have been any "late glacial valley glacier expansion episodes" in these early glaciations.  But we cannot be sure about that until much more research is done.
Posted by BRIAN JOHN at 19:02

Could you give us a lay-person's explanation, in suitably simple terms for folk like me, for what tools people like expert Henry Patton in Aberystwyth have at their disposal to produce their glaciation models? Is an awful lot of fieldwork and sampling involved? How are provenances of, for example, different tills established?

Making these models is hugely complex, and the process requires massive computing power. You can see the process described in this article:
"Dynamic cycles, ice streams and their impact on the extent, chronology
and deglaciation of the British–Irish ice sheet" by Hubbard et al.
http://nora.nerc.ac.uk/7166/
You need to feed into the model detailed info about climate change, glacier mass balance, glacier dynamics or behaviour, topography, eustatic and isostatic changes etc. Then you have to ensure that the models as created by the computer are closely matched to the features on the ground -- glaciated valleys, moraines, lake sediments, shorelines, fluvioglacial deposits, meltwater channels etc -- and especially the ice limits in so far as we know them. The data getting crunched gets larger and larger all the time -- but once you have got your models just about right, you can then do a lot of tweaking through "ground truthing" -- ie examining exactly what you have on the ground in areas of uncertainty.

I am full of admiration for the guys who do this work -- I was always just a humble field researcher, wandering about with a shovel and a geological hammer and a practiced eye which informed me what was what.

Till provenance is relatively easy to sort out -- colour may be enough. Fr example, a till which has come from an ORS source area will often be coloured red. Till from the Irish Sea will often be calcareous and will comprise large amounts of sea-floor muds mixed in wioth erratics and even sea shells. Sources for the cobbles and boulders contained in the till will also help to tell you where it has come from.