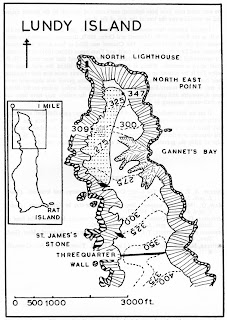 This map, by Prof Frank Mitchell, published in 1968, shows pretty conclusively that the ice of the Irish Sea Glacier came in from the west and overrode the lowest part of the island, up to a limit of about 100m above sea level.  The dotted area shows "glacial gravels" with abundant erratics, and the black blobs show tors that Mitchell considered to have been overridden and moulded by ice as it crossed the island.  He thought that areas above c 100m remained ice-free at this time, since there are no glacial deposits on the southern part of the island, and the tors have not been destroyed.  So he thought that the southern part stood up above the ice as a nunatak, as ice flow streamed round the upstanding upland (remember that the sea was not there at the time) and continued eastwards.

Interesting info.  There are two great questions:  Was this glaciation Devensian, or earlier?  And if the ice surface altitude was c 100 m in the vicinity of Lundy,  did it have the energy to reach the adjacent coast, on the other side of Barnstaple Bay, about 20 km away?
Posted by BRIAN JOHN at 18:08

Changing the subject from ice to that of prehistoric man, but retaining the Lundy Island location, I would be interested to know, Brian, if you have heard of Preseli area man Robin Heath's assertion that it is no coincidence (in terms of human prehistoric activity) that Lundy Island is exactly DUE WEST of Stonehenge? I believe it was in a book co-authored with John Michell that he put forward the notion that Stonehenge, Lundy and The Preselis are linked by a right-angled triangle!
The authors claim that prehistoric surveying techniques were astonishingly advanced. I note that you appear to enlist Robin Heath as an advocate for your view that the Preseli Healing Springs theory of Messrs Darvill & Wainwright are nothing more than a theory( see pages 84-86 of your "Bluestone Enigma" book, Chapter 5, "Spreading The Myth".

Yes. Robin and I are old friends -- we have known each other for years. That doesn't mean I agree with everything he writes or says! We share a common view on some things -- but I'm afraid I have no time at all for his triangles, alignments and numerical jiggery-pokery. For every triangle that "fits" whatever you want it to fit, there are thousands of other triangles that don't -- Robin's sort of numerology sounds very impressive and seductive, since people love to find order in chaos, but I do find his ideas intensely irritating and frankly unscientific! But there you go -- Robin knows my opinion. It's a free world, and we will all believe what we want to believe....