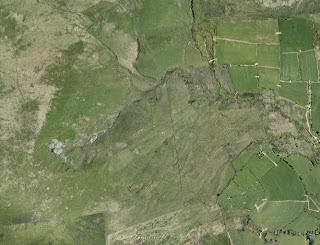 The only cwm on the Preseli uplands, eroded over many glacial episodes by a small cirque glacier.

Was there a Preseli Ice Cap during the Ice Age?  Almost certainly, yes -- on a number of occasions, at the beginning and end of each glacial episode.  This is exactly what we would expect in a location some way removed from the main ice centres but which would probably have had adequate precipitation to create a permanent thin ice cover while the big ice caps were waxing and waning over the Cambrian Mountains, over Ireland and in the Irish Sea area.  I got thinking about this from having a glimpse of the latest computer models of the Devensian glacial episode, from Aberystwyth University.

The only trace of a moraine which can be termed "local" is in the cwm to the east of Foelcwmcerwyn, the highest summit on Preseli -- at 536 m.  There is a rather indistinct ridge made of till, down in the valley beneath the old slate quarry and dissected by stream action.  I have always thought that this feature dates from the last small glacier on Preseli -- tucked away on the shady lee side of the summit, where snow could accumulate and survive and be converted into ice.  The glacier will have been a small cirque glacier, capable of a modest amount of erosion.  When?  Probably Younger Dryas or Zone 3, when there were also small glaciers in many of the Welsh uplands.  But prior to that, the glacier will have existed in exactly this spot many times before, in earlier glaciations.

When the Preseli ridge was covered by its little ice cap, I don't think it was ever active enough to affect the landscape through the carving of erosional features, or through the transport of eroded debris downslope.  In other words, there may not have been sufficient ice thickness for the ice to FLOW (except in the cwm) -- it may have remained frozen to its bed, and may therefore have had a largely protective role.
Posted by BRIAN JOHN at 22:26