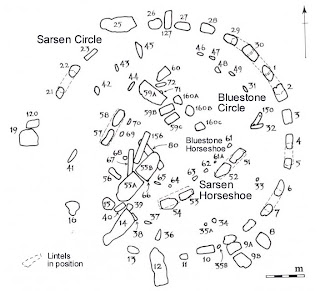 Of these, four (32c and 33e and 33f and 41d) are of "altered volcanic ash, dark olive-green in colour when unweathered, with a laminated fracture and a noticeably softer texture than the other bluestones." (Atkinson, p 48) Stone 32e is supposedly rhyolite, and stump 40c is a calcareous ash, referred to by Atkinson as a laminated blue rock. Stumps 40g and 42c are supposedly of Cosheston sandstone, "a blue-grey rock spangled with mica". This leaves 35 and 32d which are presumably dolerites, spotted or otherwise......

Another interesting point is that Hawley discovered four sockets and two stumps between stones 32 and 33, and Atkinson showed that there were five stones between 32 and 33, and no less than eight stones between 40 and 41. There are other big gaps between 33 and 34, and between 41 and 42. Did these gaps ever hold stones, or were they simply left empty while the builders of the monument searched for suitable stones and fiddled about with the ones they already had?

We already know that the "Cosheston sandstone" has been mis-identified -- and it will be interesting to see what else comes up when the new geology by Rob Ixer and Richard Bevins (arising from the 2008 Darvill-Wainwright dig) is published.
Posted by BRIAN JOHN at 10:29

Is there a good explanation why erect upright bluestones should break off and leave such stumps stuck in the bedrock? Is this due to original partial fractures or just weathering? Would breaking up of these bluestones due to weathering show up so violently as indicated by the stumps left standing? And if the stones had such weak fractures to them originally, why would these be used by the Stonehenge builders? And wont such partially fractured bluestones break upon being transported by them by sled over rough terrain from some 200 km away? Just a thought!