The malignant magic of Stonehenge: how a Roman Road story was transformed into a bluestone transport story 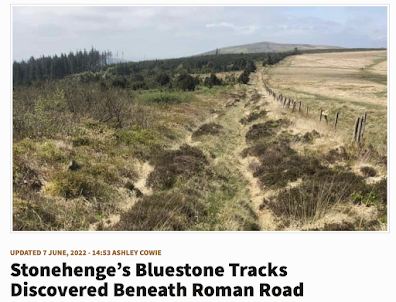 This is completely bonkers.  Today in the media there is nice simple story about Dr Mark Merrony (once of Lampeter Univ and now of Wolfson College, Oxford) finding what he thinks is a Roman Road -- or bits of it -- up on Mynydd Preseli, slightly offset from the route of the modern footpath that we often refer to as the "Golden Road".

Rather, the story was nice and simple until the media hacks got to work on it and turned it into a story about the bluestone export trackway!  The headline above is typical -- and it is a lie, because nobody has claimed to have discovered bluestone haulage tracks at all.

What Dr Merrony has done is to speculate that a prehistoric route was being used during the Roman period, and that it could well be “the same route ancient people transported the bluestones down to Stonehenge.”  No facts, just a speculation tossed out in the knowledge that it would be seized upon by the more gullible and excitable sections of the media.
The nonsense story was also developed by the Express and the Mail -- both of which used the opportunity to recycle lots of old stories in support of the new one:
https://www.express.co.uk/news/science/1621723/stonehenge-builders-ancient-roman-road-found-wales-preseli-hills-archaeology
https://www.dailymail.co.uk/sciencetech/article-10888907/Ancient-road-discovered-Wales-follows-route-taken-transport-bluestones-STONEHENGE.html
But at least both of those did have the good grace -- with ragerd to the bluestone haulage component -- to use the words "may" and "perhaps".
The only media outlet to play the story straight and responsibly was the Guardian:
https://www.theguardian.com/uk-news/2022/jun/05/romans-ventured-deeper-into-wales-than-thought-road-discovery-shows
It's a nice story anyway, without that ludicrous embellishment -- and Dr Merrony should be more careful with his press releases and statements to the press in future.
Sadly, all this does is confirm that archaeology is now so obsessed with fantastical stories that it deserves no respect from anybody.
------------------
PS.  This is the BBC coverage of this crazy story -- it plays its part in the promotion of nonsense, as well as confirming that there is no long-term study here, involving the accumulation of hard evidence.  As far as we can make out, Dr Merrony was out for as walk in April, spotted some entrenched bits of trackway and started to put together some speculations.  Hmmm....
https://www.bbc.co.uk/news/uk-wales-61712158
And he likes his mythological speculations -- in his last article the made a link between a Roman road section and King Arthur..........
https://www.academia.edu/43470468/King_Arthurs_Lost_Roman_Road
Whatever next?  Paddington Bear and Dan Dare?
Posted by BRIAN JOHN at 17:47

A seven mile route over or around the presceli leaves the question wide open where the road was from and where it was going to.

There is talk of a silver mine but I don't know where that might be.

If we are talking gold from Ireland then the landing would be Fishguard or Newport and the route around the other side of the mountains.

Maybe somebody with more insight can fill in the blanks - please?

There are old trackways all over Preseli -- some following the ridge and others crossing it. I would like to see the evidence that this is indeed a continuous route, rather than a number of segments stitched together just to make a good story........ There is some scepticism among the locals who know Preseli well........

The paper is due out some time this month. Normally you time a press release to coincide with publication. Not sure what they are up to here....

The biggest scandal is the claim that the road is "Roman". Check out this video - https://www.youtube.com/watch?v=vQtMiNFl9U8&t=178s

Is this story barmy as we say in Yorkshire? Or is the good Dr Mark Merrony from across the sea in Ireland and away with the little people, a sort of archaeologist version of Ardal O'Hanlon. The Romans WERE in Carmarthen, as I discovered in a coach stop-over, and the evidence is everwhere, overground, underground, like The Wombles. But I don't believe this Express-emblazoned story any more than I believe in our ignoble Leader.

Quite a fuss on social media abouit this. here is a comment from Hugh on Preseli360, which hasd a vast following:

A number of people have very kindly sent me links regarding the "discovery" of a Roman road in Preseli..
I find it utterly surprising that it has come as such a shock to so many that this could be true. That is fine, perhaps the Roman era in history is not what enters most peoples minds when they set out to explore Preseli.
What I find is TOTALLY BONKERS...
"Finding bluestone transport tracks below the roman road"
" This MUST be the route used for bluestone transport to Stonehenge"
This is simply a complete mish mash of grafting history together like shoe Horning unrelated jigsaw puzzle pieces together..
There are ancient tracks, (many far older than Roman) all over Preseli and although roman remains have been found, a possible Fort at Tafarn Y Bwlch, the Villa at Pensarn, a possible road south of Sinar leading to Tafarn Y Bwlch, there is ABSOLUTELY NO HARD EVIDENCE of ANY link between this new "discovery" and human bluestone transport, (which there still is no proven hard evidence for ANYWAY) .
This is all pure speculation, and as unfortunately most people do not look deeper into such things they can get away with pasting timeliness together as most will not realise the problems with such ideas.
Be careful what you believe out there on social media, I have no problem with there possibly being a roman road out there following the contours of the hills, I am very much looking forward to using my knowledge and technology to find it, but please do not make a claim that is is the true golden road, when I believe I have seen why the ridge track gained that name and that this has ANYTHING to do with the folklore of bluestone transport, until scientifically and independently proven otherwise...
--------------------------
I think Hugh has got it spot on. Thank God there is still some sanity ouit there.......