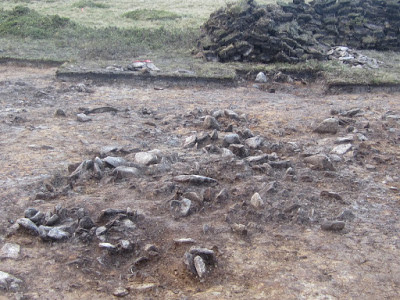 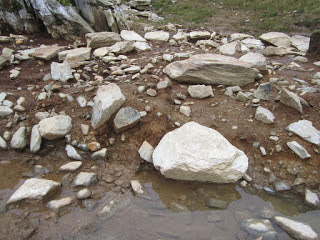 Waun Mawn and Craig Rhosyfelein -- two sites where mythification and interpretative inflation have been unrestrained.  The former is promoted as the site of "proto-Stonehenge" and the latter as the site of  a bluestone quarry and "a prehistoric Pompeii".......

It's interesting to reflect further on the significance of the recent article by Gordon Barclay and Kenneth Brophy, not just because of the manner in which Neolithic archaeology in the UK has become dominated by the "British Neolithic Mythos" or mythical narrative, but also because of the diminished respect for evidence and the truth that we see in many so-called "academic" or "scholarly" publications.  At the same time we see the decline of the scientific method, ubiquitous assumptive research, the assignment of false significance, the refusal to set up control studies, and the obsessive use of ruling hypotheses leading to the twisting and manipulation (and also the invention) of evidence.  Some studies have become so distorted that they should probably be classified as scientific hoaxes.

So scientific malpractice is more and more common.  And it can be no coincidence that this trend has become noticeable while phenomenology has become popular in academic archaeology -- the invention of "the story" is the thing, and facts and evidence are deemed to be rather boring..........  So the truth ceases to matter very much, if at all.

1.  presentation of data with relatively restrained preliminary interpretation in the first part of the original academic paper;

2.  less tentatively, in the later part of the paper (and in the Abstract) more far- reaching interpretation, with less support offered;

3.  even more ambitious claims in media releases prepared by the universities, incorporating direct quotations from the authors;

4.  creation of attention-grabbing headlines and soundbites in the media by journalists working from the press releases,  further amplified through interviews with the lead authors, and affected by the media outlet’s own political angle.

(I might add a phase 2 (b), in which authors of original "learned" papers follow them up with unreferenced and "sexed up" versions of their research in popular glossy archaeology or history magazines.)

We can see this process of inflation at work in almost all of the bluestone-related papers published in recent years by the Bevins / Ixer / Parker Pearson cooperative,  as I have pointed out over and again in my analyses of their work.  We can see it most recently in the many articles cited by Barclay and Brophy relating to Stonehenge, Durrington Walls, teeth, bones and isotopes. (Again, purely by chance, Prof MPP is often involved......)  And we can see it with startling clarity in the recent paper by Vince Gaffney and others on the "Durrington Shafts" which will no doubt have the same fate as the spectacular "line of massive standing stones" supposedly discovered a few years ago.

Should we be worried?  Well, yes we should -- because when academic standards are lowered and when all that matters is "impact" public cynicism about academia is bound to increase.

So when Sue Greaney give a podcast incorporating a fantastical narrative (and almost a liturgy) relating to a Neolithic burial ceremony, at one level it's a bit of radio entertainment, but at another level it's a demonstration that storytelling and marketing have become more "respectable" than scientific evidence and the truth.

Some years ago I had a bit of a spat with  Bronwen Price about her fantastical interpretation of the Craig Rhosyfelin site on a popular Welsh tourism website called "Land of Legends".  On the site, many fascinating locations were included because of their mythological / literary associations.  The Craig Rhos-y-felin entry should not have been included at all, since there is no mythology attached to the site. (Or at least there wasn't until MPP started to create it.)  But for better or for worse, there it is, written by Bronwen Price of Literature Wales, who has an archaeology doctorate and who should therefore know what she is talking about.  But in almost every respect, this entry is at fault, portraying the assumptions and speculations of a few archaeologists as established fact.

With regard to the “site description”, these are some of the fundamental errors:

Some of the bluestones of Stonehenge were quarried here. There is no evidence to support this statement. Some small fragments of foliated rhyolite found in the soil at Stonehenge appear to have come from the Rhosyfelin area — that’s the best that can be said. They might have come from destroyed cutting or slicing tools. The use of the word “quarried” is entirely inappropriate.

First used for a local monument in about 3400 BC, they were moved to Salisbury Plain 500 years later where they stood in various settings before the giant inverted ‘U-shaped’ stones joined them in 2500 BC. There is no evidence for there ever being a “local monument” or photo-Stonehenge in the local area around 3400 BC or at any other date. That is a piece of unsupported speculation from Mike Parker-Pearson. There is no evidence that the stones were moved to Salisbury Plain by human agency c 2900 BC or at any other time. The smaller bluestones at Stonehenge were indeed moved about and used in various settings, but there is no proof that the sarsens were not used on the site until later. The expression “giant inverted U-shaped stones” is really rather strange — each of the trilithons consists of two uprights and a capstone.

This makes Stonehenge a truly Welsh site….. This is nonsense.

…..something supported by the Boscombe Bowmen: seven individuals re-buried in a mass grave near Stonehenge around 2300 BC. All were seemingly born and raised in south-west Wales, travelling to Wessex during their lifetime. This is wild speculation — I know of no evidence linking the Boscombe Bowmen to SW Wales. According to all the published analytical data, they are just as likely to have come from elsewhere in South Wales, Devon, Cornwall, or the Lake District or any other area of ancient rocks.

This connection and journeys from the west are recalled in folk legend - Geoffrey of Monmouth (c. 1100-1155) retells the ancient belief that Merlin brought Stonehenge from Ireland. The idea that Geoffrey of Monmouth was repeating some ancient “folk memory” has been around for a long time! But we now know that he invented many of his stories with political and PR considerations in mind — and he was indeed in the business of promoting Wales and its heroes. He was a fiction writer, and not an historian, and he invented the “ancient belief” himself.

The rock face retains the natural pillar formations which the stone-cutters exploited. This is incorrect. On the rock face there are many intersecting fractures, which explains why the most predominant shapes in the slope accumulations are slabs and blocks rather than elongated pillars. There were no “stone-cutters” at Rhosyfelin, in spite of what Mike Parker-Pearson may tell you. In the Neolithic there was no method which allowed the cutting of stone.

You can enjoy a picnic where they camped 5400 years ago. This at least is partly true! Radiocarbon dates show that there is a long history of intermittent occupation by hunting and gathering parties at Rhosyfelin, between the Mesolithic and the Middle Ages. None of the dates coincides with a supposed "quarrying phase".

When all of this was pointed out to Bronwen Price and Literature Wales, they refused point blank to re-write this entry to more accurately represent the scientific consensus.  Stubborn mules and ostriches with heads in sand come to mind.

Neither Visit Wales nor Literature Wales should be in the business of inventing an "alternative truth" or promoting new myths based on dodgy science.  Nor should the archaeology departments of our universities, or the professional academies which supposedly exist to uphold standards.

I have been involved in a jolly spat on a Facebook group page, in which I pointed out that certain contributors who were regurgitating the media praise for the latest Altar Stone paper should really read the paper rather than Daily Mail and Times headlines.  I said that what we were seeing, in the media coverage of that paper, was classic interpretative inflation, since the paper was actually a geology paper with no archaeology in it whatsoever.  Some of the comments were classic ones, submitted by people who were furious that I should seek to undermine the ignorance of a lifetime; they feel, as do many other gullible people, that what eminent archaeology professors say is bound to be correct.  All good fun, but the most interesting thing was that somebody mistakenly used the term "interpretative INFLAMMATION."  I really like that.  Inflammation, of course, means setting something on fire, or in a medical context a bodily reaction to harmful stimuli.  Spot on!
Posted by BRIAN JOHN at 11:44

I played this dramatic song on my record player this morning because it's from a brilliant album and it happens to be my birthday. AND it now seems to be highly appropriate to this Post!

It makes me wonder

What's going on under the GROUND

Thank you, Peter. Keep up your artistry.

Thank you, Peter. Keep up your artistry.


I have "THE INFLAMED MIND: A RADICAL NEW APPROACH TO DEPRESSION" by EDWARD BULLMORE, 2018.

Peter, just realised your message to "Carry On" was a nod to CSN & Y's "DEJA VU" album!