Archaeology and the invented narrative 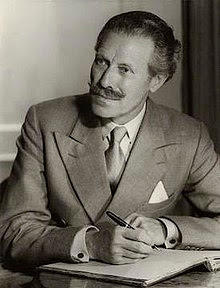 From the ever-reliable and objective rag called the Daily Mail comes a story that should at least make us stop and think for a few moments -- a tale of an archaeologist (Sir Mortimer Wheeler, no less) inventing a spectacular story on the basis of very little evidence which is now shown to have been complete nonsense.

The story of a vicious assault (by Vespasian and a Roman legion) on Maiden Castle in Dorset in the year AD43 followed an excavation by Sir Mortimer and his wife in 1936-7.  It was based on the discovery of multiple "British warriors" with terrible injuries in hurriedly dug graves  -- and the "leap of faith" by Sir Mortimer in concluding that he had discovered a "war cemetery."  He also concluded that the slaughter of the local warriors by the Romans led to the abandonment of the site.

This exciting and appealing tale was picked up and repeated in many other papers and texts, and remains to this day a part of the EH narrative for this site and for the events of the Roman Conquest.

This is an interesting extract from Wikipedia:

After ending his work at Verulamium, Wheeler turned his attention to the late Iron Age hill-fort of Maiden Castle near to Dorchester, Dorset, where he excavated for four seasons from 1934 to 1937. Co-directed by Wheeler, Tessa, and the Curator of Dorset County Museum, Charles Drew, the project was carried out under the joint auspices of the Society of Antiquaries and the Dorset Field Club.  With around 100 assistants each season, the dig constituted the largest excavation that had been conducted in Britain up to that point, with Wheeler organising weekly meetings with the press to inform them about any discoveries. He was keen to emphasise that his workforce consisted of many young people as well as both men and women, thus presenting the image of archaeology as a modern and advanced discipline. According to the later historian Adam Stout, the Maiden Castle excavation was "one of the most famous British archaeological investigations of the twentieth century. It was the classic 'Wheeler dig', both in terms of scale of operations and the publicity which it generated."

Wheeler's excavation report was published in 1943 as Maiden Castle, Dorset. The report's publication allowed further criticism to be voiced of Wheeler's approach and interpretations; in his review of the book, the archaeologist W. F. Grimes criticised the highly selective nature of the excavation, noting that Wheeler had not asked questions regarding the socio-economic issues of the community at Maiden Castle, aspects of past societies that had come to be of increasing interest to British archaeology.  Over coming decades, as further excavations were carried out at the site and archaeologists developed a greater knowledge of Iron Age Britain, much of Wheeler's interpretation of the site and its development was shown to be wrong, in particular by the work of the archaeologist Niall Sharples.

Back to the latest news story.  To quote from the Mail:


......... Dr Miles Russell, Professor of Archaeology at Bournemouth University believes the battle tale is ‘misleading’.   He said: ‘Most archaeologists know there is absolutely no evidence for such a “great battle” at Maiden Castle, a site which in any case had been largely abandoned a century before the arrival of Rome… another case, I guess, of not wanting an epic myth to be slain by ugly facts.’ Sir Mortimer wrote the first report on Maiden Castle in 1943. Dr Russell, in the latest volume of the Oxford Journal of Archaeology, said that since then ‘countless books, papers and television documentaries have treated a speculative Roman assault upon the hillfort as definitive fact.  ‘The account of a furious but futile defence of property, family and land by the local tribe of the Durotriges, leading eventually to their slaughter or enslavement, is undeniably powerful and remains one of the more potent stories relating to the demise of British prehistory.’

We now know that there were only 52 bodies in the graves, and fewer than 40 of those had signs of traumatic or severe injuries which might have been sustained in conflict. The graves were in fact quite carefully prepared, and radiocarbon dating now shows that the corpses held within them were placed in position over a 50-year period, ‘suggesting the population had lived through multiple periods of stress, competition and conflict’.

Since Sir Mortimer did not have access to sophisticated dating techniques in 1943, some forgiveness is in order, but there is nonetheless a feeling that he was one of the "glamour boys" of the archaeological establishment at the time, and that notoriety and press coverage were, in his mind, perhaps more important than fastidious research and cautious interpretations of digging results. 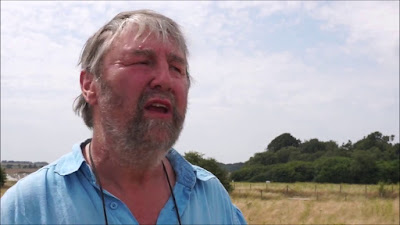 There are close parallels with the behaviour (and the reputation) of Prof Mike Parker Pearson today -- a man with a high media profile, intent on popularising and promoting his discipline at every opportunity.  For Sir Mortimer, read MPP:  "..........He was keen to emphasise that his workforce consisted of many young people as well as both men and women, thus presenting the image of archaeology as a modern and advanced discipline."  As we all know, MPP has an unfortunate tendency to develop narratives that are wildly out of kilter with the evidence unearthed during his digs.  (Like Sir Mortimer, he is based at the London University Institute of Archaeology.)  Like Sir Mortimer, he displays a tendency to ignore inconvenient evidence and scientific opinion.  His theories about bluestone quarrying in North Pembrokeshire, the human haulage of monoliths to Stonehenge, and the development and dismantling of "proto-Stonehenge" on the flanks of Mynydd Preseli have received wide media coverage and very little critical scrutiny from other archaeologists -- but they are hugely unreliable, and are unsupported by any solid evidence.

Over-enthusiastic storytellers whose archaeological digs are conducted in an unprofessional manner may enjoy short-lived notoriety, but they are always -- eventually -- exposed either as charlatans or as incompetent field workers by younger and more careful professionals, and by the use of new research techniques.

Ten days on from the publication of this Post, and the silence from the archaeological fraternity is still deafening.....silence in this case is golden.

Standard practice, Tony. Archaeologists have probably been trained to studiously ignore everything inconvenient.........