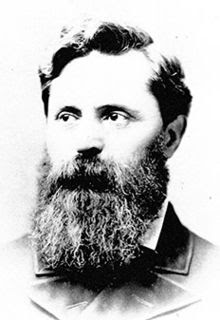 Geologist and physician Henry Hicks, a good Pembrokeshire man who
did not suffer fools lightly.

Sometimes one wonders whether our little academic spats demonstrate a lowering of academic standards, or a reduction in tolerance, or a sort of hypersensitivity on the part of researchers.  Surely it cannot have been so bad in the good old days?  Well, it's reassuring to know that it was just as bad, if not worse.......

Here is short extract from Geol Mag 1886, involving Henry Hicks (who seems to have been a crusty sort of fellow) and a certain Prof Hughes, who clearly had a habit of expressing strong views on places he had not actually visited and things he knew nothing about.........

The best reply that I can make to Prof. Hughes’ remarks, in the Geological Magazine for November, on the Ffynnon Beuno Caves, is to publish the substance of the report presented to the British Association, especially as an opportunity will be given to those interested in the inquiry to examine the section during the further explorations to be carried on, probably in the month of June next year. Some of his statements—especially as regards the position of the fence, which is entirely at the opposite end of the cavern to that at which the flint flake was found, also as to the position of the flake, and. the nature of the deposits overlying it—are so entirely misleading, that I can only account for such statements being made by the fact that Prof. Hughes did not visit the section, though strongly urged by me to do so, until it had been almost entirely covered over, and work for the time suspended, and by his hasty survey of the surrounding conditions.
Posted by BRIAN JOHN at 11:48

(well over a year after it was recommended)

Yes, that involved a bit of a spat. Certain people DID NOT WANT that designation. It was extremely inconvenient to their cunning plans.......

As a result of fossil finds,found during our cave excavation activities, My chums and I have recently been excavating the most westerly section of the Triassic/Jurassic boundary on the south flank of the Mendip Hills.

All under the direction/supervision of a former (and rather aged)professor of paleontology at one of the major London universities.

Comparison of the papers published by the professor and his colleagues with modern offerings, demonstrates a rather depressing lack of rigour and knowledge in depth, and a prospensity towards sensationalisation of the comparatively trivial!


It would appear to the non academic, that academic advancement in the modern age is not based on ideas or ability but upon who's got the biggest mouth or the pointiest elbows?

I find this rather disappointing!

Too many men (for they are mostly men) with megaphones these days, or market traders weighing their "fruits" masquerading as weighty thinkers.

To my mind this seems to encapsulate how the Stonehenge Quarryists have managed to arrive at the ludicrous position they now occupy. Monty Python really couldn't have done it better!

Unless Neolithic man used their pointy elbows to quarry the bluestones? Perhaps this non-invasive/destructive technique, could well account for the complete lack of evidence for "Bluestone" quarrying activity in wales?