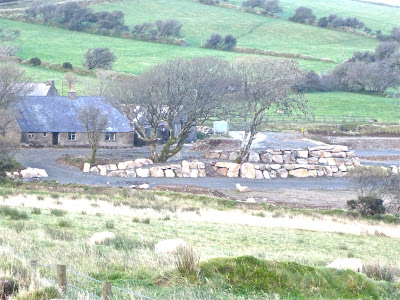 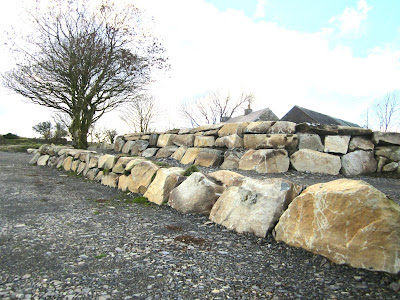 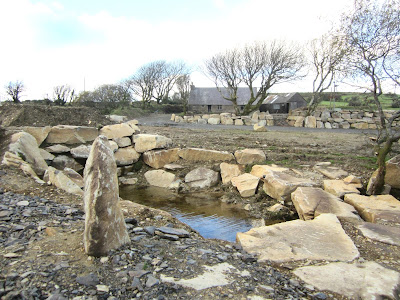 Some serious landscaping work has been done on the site at Tafarn y Bwlch, largely associated with the garden and car parking areas.  This may have been done now because the original planning consent was given in 2008 -- so maybe it needed to be demonstrated that the project was under way, so as to avoid a lapsing of the consent.  That's speculation -- let's hope that work will shortly start on bthe rest of the project including the renovations to the old farm and outbuildings.

What interests me is the use of hundreds of huge glacially smoothed and faceted boulders in the landscaping work.  They are nearly all dolerites and gabbros,  and I reckon that some of them weigh well over 20 tonnes.  Where have they come from?  I'm trying to find out -- but if they have all been picked up locally, on the site, this would confirm that there is a very large moraine here -- of which more anon.

The inhabitants of Brynberian are surely delighted by the prospect of the extra traffic to Pentre Ifan and Crf. Surely good for candle workshops though :)

As for the Rocks, it does appear that much has been removed from Crf. The picnic table used to be buried I recall, and now sits proudly about the growing turf.

Well, the economy needs a boost -- hard times for farming. As for CRyF, I don't think anything has been removed -- but a huge amount of spoil has been rearranged, and the contours are now quite different.....

The video (by National Geographic) looks at how the Glacier National Park in Montana has changed since the 1800s via the retreating glaciers, a process which has apparently increased noticeably in recent years:

The USGS has a corresponding section on its website with a more detailed look at the phenomenon:

Perhaps you should send a few dolerite samples to Myris at Alexandria aka Sutton Coldfield* (enclosing a box of chocolate in payment) and he could attempt to provenance them within the Preselis - if, indeed, they have originated from your small part of North West Europe.