An erratic lesson from Flimston

There are rather a lot of erratics in Devon, Cornwall and Somerset.  Quite a few in Wiltshire too.  Some are very well known, and others are rather obscure (although thanks are due to Pete Glastonbury for drawing attention to some of them.....).  We have innumerable posts on this blog referring to erratics in the area, in many different contexts -- for example here:
http://brian-mountainman.blogspot.co.uk/2011/11/stray-stones-in-south-west-england.html
Where we do know the provenances of these erratics, they always seem to have come from the W or NW -- and it is hardly a coincidence that this coincides with the direction of ice movement of the Irish Sea Glacier.   Here are just three of them, well described in the literature: 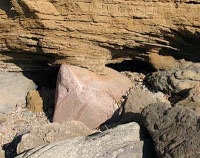 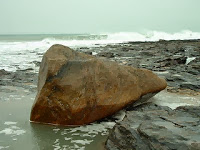 The interesting thing about these erratics, of course, is that because they are in "natural" contexts, nobody (not even the most senior archaeologist!) ever questions that they are true erratics, emplaced by natural processes.  In all the cases above, they have been emplaced by glacier ice, on the English side of the Bristol Channel.

Let's move back across the Bristol Channel to Pembrokeshire.  I have just caught up with Adrian James's interesting blog, in which he shows photos of many South Pembrokeshire erratics that have been carried from the NW by the ice of the Irish Sea Glacier.  They are scattered about all over the place!  Here are two photos of the erratics in Flimston Churchyard: 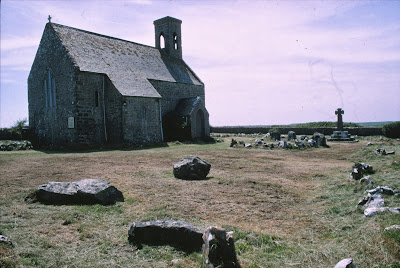 Flimston Church, near the southern tip of the Castlemartin Peninsula, south Pembrokeshire, and the seven erratics.  There are four in the foreground and three clustered together and used as grave headstones, just to the left of the cross.  (Photo: Adrian James) 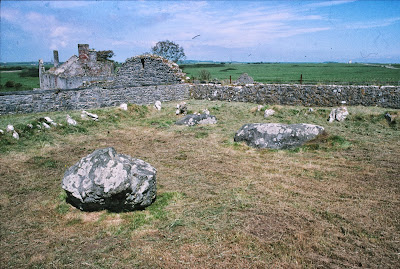 The cluster of four "unused" erratics in the corner of the Flimston Churchyard, near the ruins of Flimston farm.  (Photo: Adrian James)

I have covered this before, in January of this year:
http://brian-mountainman.blogspot.co.uk/2013/01/more-south-pembrokeshire-erratics.html
but a revisitation is needed.  The following is adapted from Adrian's text:

Flimston Chapel churchyard (SR92399558). There is a substantial collection of erratics in this churchyard. Some have been used as headstones for the graves of members of the Lambton Family who died in military service. Others have been left sitting in one corner of the enclosure. All of these stones arrived in the churchyard when the chapel was renovated and re-consecrated in 1903. There are 7 of them. A pamphlet, which describes the features and memorials in the yard, printed at the time of the opening of the chapel in about 1914, gives us these vague details:

Most of these appear to have travelled over 30 miles from the N. West separated from their parent rocks by St Brides Bay and Milford Haven, and by a considerable mass of high ground.........

Clearly there was some significance in dragging these rocks from their resting places about the area, but quite what the intention was is unclear. It seems likely, as I have mentioned elsewhere, that they were all intended to be memorials or headstones.

There are many other erratics featured on Adrian's Blog, but this is the most substantial of them, in the farmyard of Loveston Farm: 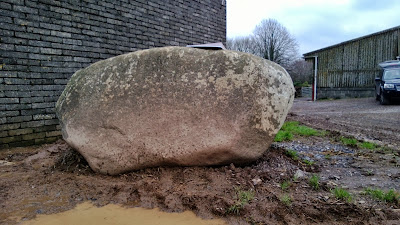 Now then, what is particularly interesting about Flimston Churchyard and Loveston Farm is that the erratics occur in cultural contexts -- a churchyard and a farm.  The provenances have not been fixed precisely, but we can be pretty sure that all of the erratics come from the St David's Peninsula, not far from St David's itself. Why is it that nobody has gone hunting for the "quarries" from which these erratics came?  After all, the farmer from Loveston has plenty of tractors and high-powered equipment at his disposal, and could well have popped over to St David's to fetch his stone if he had wanted to.  And even in 1903, when Flimston Churchyard was restored, there were cranes and mechanised transport available to help fetch seven stones from the St David's area if that was what the Lambton family had wanted to do.  Why therefore does it appear "logical" to assorted archaeologists (who shall be nameless) that the Neolithic tribes of Salisbury Plain would have wished to haul all the way to West Wales to collect  80 bluestones, given the extraordinary constraints of distance, terrain and technology?  I have said it before, and I will keep on saying it -- it just doesn't make sense.

The interesting thing about Flimston is that the people who had a cunning plan for the churchyard in 1903 did actually range across the countryside looking for stones that would fulfill a cultural / spiritual purpose -- they wanted them as grave headstones, in an area where they happened to be lying around.  Not because they were magical in any way, but because they were convenient and maybe just a little unusual.  The landscape was -- and is -- relatively open and bleak, with few trees.  So the erratics were quite visible.  They collected them from the immediate vicinity, and up to 3.4 km away, according to Adrian.  Maybe that was effectively the limit at which costs began to outweigh benefits?

I have argued in precisely similar fashion that the bluestones at Stonehenge were lying around in the landscape, ready to be collected.  (We know that at least one of them was built into a long barrow called Boles Barrow, near Heytesbury.)  Maybe the presence of these stones -- and abundant sarsens -- was not the original reason for the construction of the early earthworks.  But it may well be the reason why stones started to be used, and why ultimately a rather spectacular stone construction was started -- if never finished -- on the same site.  Forget about this periglacial stripes nonsense -- this is a much more feasible hypothesis.

So let's ask this basic question.  Why is it that archaeologists are prepared to accept the presence of erratics in natural contexts in the SW Peninsula, and in cultural contexts in places like Flimston and Loveston (not to mention Boles Barrow / Lake House and other locations in Southern England) but not on Salisbury Plain?  The reason is that HH Thomas in 1920 declared that it was impossible for glacier ice to have reached Salisbury Plain.  That was a silly idea in 1920, and it is even more silly today, given what we now know about glacier action on Dartmoor, in Somerset and other parts of SW England.  The word "impossible" should never be use in earth science research unless we are talking about things that defy the laws of physics.

The obsession with quarries is really rather wearisome........ and fundamentally illogical.

Naughty naughty!
Please name more than two archaeologists who accept that the Boles Barrow spotted dolerite is an incorporated erratic.
It may be, but like all the best bits of the SH story its history is most murky. Not proved. We must, as you quite correctly say, stick to interpreting the data there are plenty of them.
Those large erratics on the southcoast of Cornubia are of great interest. The one at Porthleven is the nicest thing about the village- oh the pub built into the cliff face is good out of season, but the rest less so.
M

Not in the least bit naughty, Myris. The only reason why most archaeologists say that they doubt the finding of the stone in Boles Barrow is that it is mighty inconvenient, and blows a giant raspberry at all their ideas as to when the bluestones were supposedly imported! So they stick to the party line, so as not to get into trouble with their peers. It's all perfectly simple.

Scavanging scattered erratics in an area to build does not explain how the Rhosyfelin foliated rhyolite fragments in the debitage got to Stonehenge! That is ”the killer question” that holds the key to the Stonehenge enigma.

Trade you argue? Really? MPP would be pleased!

"The obsession with quarries is really rather wearisome.....and fundamentally illogical".

I agree....we are here in the Indiana Jones realm of Wild Goose Hunts....see my Monet colour image reproduced on a Post c. October 2012 (via Brian's trusty Search Engine).

I have slightly re - written, without permission but with acknowledgement to the composer John Sheldon and the Singer, James Taylor*, the Song "September Grass":-

Well, the sun's not so hot in the sky today
And you know I can see summertime slipping on away
A few more wild geese gone,
A few archy faces turning red..."

Prophetic? I think so. Give it time.

Ah via Bacon we arrive once again with Jo Moma.
J is for Jump.
Life has not been kind to Master Taylor no Wilde picture for him.
M