Another hypothesis bites the dust 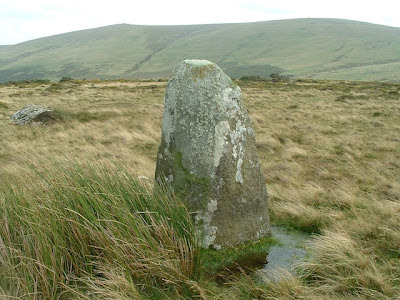 Above we can see one of the standing stones of the Waun Mawn group, not far from Tafarn y Bwlch on the northern flank of Mynydd Preseli.  On the left you can also see one of the recumbent stones.

I have another piece of intelligence from the MPP digging party of this summer.  A year ago, the thesis was being developed that there was once a gigantic Waun Mawn circle of standing stones, maybe using stones taken from the famous "quarry" at Rhosyfelin, which was later dismantled and hauled off to Stonehenge.  That was an essential part of the fanciful story which got me so worked up at the famous Newport presentation in September 2011.

I pointed out at the time (see my post of 11 Sept 2011) that there are only three stones that might be considered as part of a circle circumference, and that only one of those is a standing stone.  The others are recumbent, and may never have been used as standing stones in the first place.  You cannot fit the three stones onto a circumference without considerable jiggery pokery.  The stones are local dolerite erratics, derived from close at hand -- they are not foliated rhyolite.

Anyway, from a conversation with one of the MPP research team it now appears that they have done some geophysical investigations on the supposed "gigantic stone circle circumference" and have found nothing at all.  So it appears that the thesis has been quietly dropped -- and it appears that no further work was done on the site during the 2012 digging season.

Another example of a mad hypothesis dreamed up and publicised in haste, and then quietly dropped for lack of evidence.......
Posted by BRIAN JOHN at 10:19

Another load of old cobblers, as you point out in your previous post.

"....are the stones that once stood [at Waun Mawn] now amongst the bluestones at Stonehenge? To drive home the possibility, [my Sheffield colleague] Andrew [Chamberlain] pointed out that the diameter and spacing of this possible former circle.....would have been almost exactly the same as that of the Aubrey Hole circle at Stonehenge".

MPP goes on in his book [page 288] to admit that the geophysical survey of 2011 had failed to reveal any evidence for a larger Waun Mawn stone circle of which its current 4 stones might have been a part.

But MPP at once (!) has an alternative hypothesis to work on, involving Castell Mawr [also page 288] and a hoped-for/ hyped-for? connection with "bluestone quarries on the north side of Preseli".

I see a fluttering of feathers....

I hadn't got round to reading that chapter yet --- I see that there is reference to Waun Mawn and the assorted speculations about it. As you say, Tony, they want a large stone circle somewhere, so the latest hypothesis is that it was at Castell Mawr....... maybe all these fine theories keep the Nat Geog Mag interested, and keep the funds flowing in!

Wonder if the dreaded Simon Cowell Empire would be interested - seems like a good not so little earner, Simon.

reminds me of this!
PeteG

Host: Miss Anne Elk, who is an expert on the...

Elk: Yes, I certainly am, Chris, how very true, my word yes!

Host: Now, Miss Elk - Anne - you have a new theory about the brontosaurus.

Elk: Could I just say here, Chris, for one moment that I have a new theory about the brontosaurus?

Elk: Oh, what is my theory?

Host: (slightly impatient) I am asking.

Elk: And well you may. Yes my word you may well ask what it is, this theory of mine. Well, this theory that I have--that is to say, which is mine-- ...is mine.

Host: (more impatient) I know it's yours. What is it?

Elk: Where? Oh, what is my theory?

Elk: This theory which belongs to me is as follows. Ahem. Ahem. This is how it goes. Ahem. The next thing that I am about to say is my theory. Ahem. Ready?

Elk: The Theory by A. Elk brackets Miss brackets. My theory is along the following lines.

Elk: All brontosauruses are thin at one end, much MUCH thicker in the middle, and then thin again at the far end. That is the theory that I have and which is mine, and what it is too.

Host: Well, Anne, this theory of yours seems to have hit the nail on the head.

Host: (ironical) Thank you for coming along to the studio.

Elk: Saying what my theory is.

Elk: And whose it is.

Elk: I have another theory.

Host: Not today, thank you.

Elk: My theory number two, which is the second theory that I have. Ahem! This theory...

Elk: ...which, with what I have said, are the two theories that are mine and which belong to me.

Host: Look, if you don't shut up I shall shoot you.

Elk: Ahem! My brace of theories, which I possess the ownership of, which belongs to me...

Elk: Ahem. The Theory the Second by Anne...

Pete. Mike PP does mention Spinal Tap in his new book (that I keep mentioning but have no financial interest in, honest) as if to show he has a sense of humour.

Also, I'm sure you, like me, know John Cleese comes from Weston- Super-Mare, but many others on the blog may not! Just thought I'd mention that, it might be useful. Somehow. Ahem.

I was a student in W-S-M in the 1970's and used to help John's Mum with her shopping.
PeteG

Now John Cleese has raised presumably much-needed funds on his recent "Alimony Tour" of the UK, maybe he has a bit of cash to spare to lend us a hand for an official Bluestone Search of the coast and hinterland of North Somerset?? Those glaciers certainly dropped off Irish limestone at Kenn, for instance.....Are you up for it, John? You always did like a bit of controversy, e.g. Life of Brian.... Come to think of it, we could ask much-travelled Michael Palin too.

Brian, I drove out of Brynberian recently and stopped to view the countryside while half-way up the mountains, not far from your home. I saw countless square miles of moorland which is largely unexplored by archeologists and was reminded of the recent accidental discovery of the temple complex on Orkney. Who knows what lies beneath the turf!

The southwards view resembles the amphitheatre descriptions of the reporters from Orkney.

We have only two groups of facts. 1) the geological link between the bluestones at Stonehenge and Prescelli and 2) the evidence for some kind of neolithic activity over many centuries in the vicinities

MPP told me that the geography of the Prescelli area and pastural exploitation for a long time means that evidence is hard to find. And they have only started to look for evidence with modern techniques.

People on the Rhos-y-felin dig told me they believe there was nothing special about the stones. Rather a circle was moved for its cultural associations. It seems you agree about the quality of the stones and disagree about the culture. I hope, being a fair minded scientist, that you have an open mind about the culture until more digging and geophysical studies are done.

I think the potential discovery of a bigger neolithic society in Prescelli will not determine the transportation debate finally. Stone age people knew about stones and would have known that a volcanic was rare. At the site I saw a stone that had been mechanically sliced, presumably for further analysis; it was deep blue on the inside with clear rivers of crystal - quite fascinating. Maybe it is already with Dr Ixer?

Even when the stones arrived near Stonehenge via glaciation, it is plausible that stonehenge people might recognise the origin - much as our early geologists did a hundred years ago. All the more remarkable when this could be linked to a known society near the West Coast of Wales.

I think stone age people were no more stupid than we are, and they had the advantage of a much longer folk memory. It is inconceivable to me that they did not have a sensitivity to different rock types.

Chris -- yes, it is an interesting landscape with much still to be discovered. Mind you, while I accept that assorted Neolithic traces might be found, I would not go along with the idea that this area was some sort of "sacred heartland" or "Stone Age Westminster" -- let alone a Neolithic Holy Land. Rev Done Bushell said that sort of thing long ago -- not referring to this area, but to the area SE of Preseli.

The idea of a circle being erected and then transported lock, stock and barrel has also been around for a very long time -- HHT used that argument for his supposed stone circle transported from Cilmaenllwyd. There never was any evidence to support it, but these little theories seem to keep MPP and his colleagues in a state of high excitement...... and they probably ensure that more dosh comes their way from the Nat Geog Magazine too.... Money for ideas, maybe, instead of money for results.