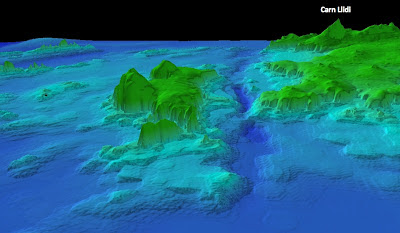 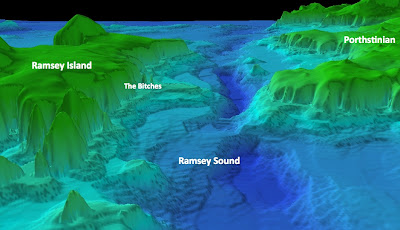 I thought these might be of interest.  They are 3D computer-generated images of the St David's Head - Ramsey Island area in Pembrokeshire, based upon mapped topographic information for the land areas and on soundings for the offshore area.  Courtesy Dr Chris Wooldridge of Cardiff University.

Click to enlarge.  As we can see, the vertical scale is exaggerated in order to emphasise topographic differences.

What can we see in these images?  On the land (green) we can see undulating erosion surfaces -- probably between 10 and 20 million years old, with ancient islands (monadnocks) standing above them both on the mainland and on Ramsey Island.  One of these old erosion surfaces is beneath sea level, and stretches out to sea beyond Ramsey Island -- it reminds me of the skerries of western Norway and eastern Sweden, and the landscape of rocky shoals and islets is a result of glacial scouring and also marine action.  These skerries are top left on the top photo.

The most spectacular feature to be seen is the incredible closed trench that runs along Ramsey Sound -- seen particularly well in the bottom photo.  I'm pretty certain that this was originally a subglacial meltwater channel, like those of Porthclais and Solva on the south coast of the peninsula -- but clearly tidal scour has played a great part in keeping this trench free of thick sediments.  the tidal stream that goes through the sound on both a falling and a rising tide is quite something -- which is why the Bitches reef is a magnet for whitewater kayaking buffs.
Posted by BRIAN JOHN at 21:03

Aaah, monadnocks.............takes me back to my student days. that trench that runs along Ramsey Sound, between Ramsey Island and the mainland is quite fearsome. We've been around Ramsay in a tourist vessel which was sufficiently adventurous for me. No whitewater rafting, thank you.

Never fear, the bluestones went their leisurely way via the Taf to the vicinity of Laugharne; either that or overland via Meidrim and then Camarthen before joining the A40.

Glaciation is of course a possibility.

Still think the dolphins were involved in some uncanny, New Age fashion, Ramsey Sound trench or no trench. Must make note in diary: attend next Psycho-Archaeological Glastonbury Convention. Expect Robin Heath knows a thing or two about anthropomorphical/kinetic links with dolphins, or knows a man who does.