In recent posts we have been looking at the west and south of the UK, and trying to work out how eustatic and isostatic factors might have combined to create the features that we can recognize today -- either in the landscape or in sediment sequences.

But what about the east, and the area now submerged beneath the North Sea?  Can we learn anything from the Holocene history of this area that might help us to reconstruct the events before, during and after the Anglian Glaciation? 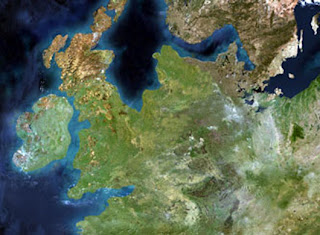 Above is a pseudo-satellite image of what the landscape might have looked like c 10,000 years ago.  Then comes the following sequence, with reconstructions for c 9,000 BP and 7,000 BP, showing a gradual marine transgression linked to the Holocene sea-level rise: 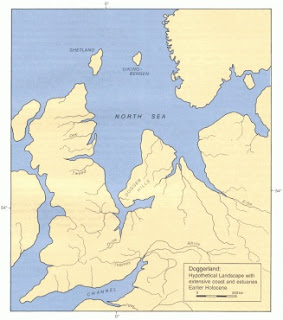 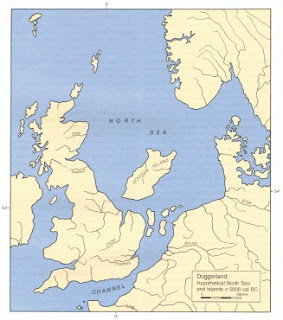 Acknowledgement to BJ Coles and SE Rouillard and others.  There is considerable doubt about where these shorelines were at particular dates BP, for the obvious reason that the evidence is somewhat difficult to get at!  Bones and artifacts dating from the Palaeolithic and the Mesolithic have been dragged up from the bottom, for the most part in trawl nets.  The highest part of the Dogger Bank today is about 15m below current sea-level, and Gaffney and various others have suggested that the final submergence of the highest point in this lost landscape occurred after Mesolithic times, maybe around 6,000 years ago.  (Some authorities think that the submergence was earlier, around 8,500 years BP.)  If the final submergence was around 6,000 BP,  sea-level will have been maybe 6 - 8 m lower than it is today.  The subsequent deeper submergence of most of this lost landscape is ascribed to the gradual isostatic depression of the North Sea Basin at a rate of maybe 1m per millennium.

This all sounds logical enough, but what interests me is the matter of glacio-isostatic depression associated with the Devensian glaciation.  None of the above maps take any account of isostatic factors, and that is a major defect in the theory.  If we are to believe the maps showing the extent of Devensian glacier ice over the UK, then at least a part (and maybe all) of Doggerland would have been glaciated around 20,000 years ago, with substantial isostatic depression of the crust in the North Sea basin.  So did the sea flood right in across this depressed area when the ice melted away, to become dry land again later as isostatic uplift rates outstripped eustatic sea-level rise rates?

Interesting questions, still to be answered.  In the drill holes put down by the oil companies during their oil explorations, I wonder if there is a layer of marine sediments BENEATH the soils, peats and other sediments associated with the mysterious lost land of Doggerland?
Posted by BRIAN JOHN at 21:23

If we accept the isostatic variations are accurate - the the Devensian glaciation must have either been larger or small but heavier than current estimations.

Although looking at the marine maps of the area - they show that doggerland is only 15m deep at the top of the hills - were they have found rivers its more 60m - hence my skepticism of the 'traditional' sea level model.

Regarding the "weight" of the Devensian British - Irish ice sheet, current estimations are based on the "norm" as follows-- a load of 3,000m of ice will result in around 1,000m of crustal depression. That seems to hold true for Scandinavia, Greenland, the Laurentide Ice sheet, and Antarctica. The strandline studies that I used to do in the good old days seemed to confirm that this was broadly correct. What we don't know yet for the UK is exactly where the ice surface contours were -- but the Aberystwyth models show, as you would expect, greatly differing ice thicknesses across the UK, because existing topography (mountains and lowlands etc) is so complex. The bright fellows who are studying all of this will get there in the end.........

Rivers in Doggerland at -60m? As I understand it, these are not necessarily Holocene rivers -- parts of that submerged landscape might be very old indeed, going back several glaciations and interglacials.

The drill core data may be available from the BGS.
GCU. In two minds